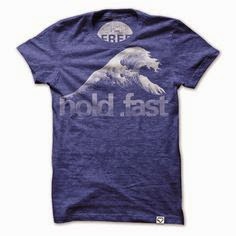 I bought this t-shirt a few years ago. I loved the thought of holding fast, holding on to something even when things get rough--but this design caught my attention because it was different from most depictions of the phrase.

Look up the words, and you'll see everything from tattoos to journal covers carrying the phrase. But most of the designs show an anchor. I liked this one because it showed the wave.

When I was first looking for jobs in high school, my dad told me perserverance was one of my greatest strengths--not letting go when things got rough. It was a nice way of saying that I'm stubborn, although people don't often see that side of me. Conflict is rarely worth the cost, but when it is, it can be hard to shake me.

It's only on the things that are close to my heart that I'm willing to run the risk of a storm. When I make up my mind to hold fast on something, my stomach pitches, my jaw clenches, and I have trouble sleeping at night for thinking about how to negotiate the next battering wave. I give a lot of attention to seeing it through.

Sometimes, though, holding fast becomes going down with the ship. Maybe it's refusing to deploy the lifeboats early enough, thinking you can make it through one more wave. Maybe you don't give up the ship, but it gives up on you.

The idea of diving out of the relative security and letting the waves toss you for a while seems terrifying and desperate. But what is it I'm supposed to hold fast to? Maybe it is that piece of driftwood. Maybe holding fast sometimes means giving up the ship.