I was sick for 22 days of January (I counted because my friend Jenny told me that the average duration of a cold is 18 days). The bug has taken down at least half of the office, in cycles, and pretty much my whole family. I haven't been that sick in a while, so it was a bit of a novel experience.

When I get a common cold bug, I try to stay home as soon as I feel it coming on (because that's when you're contagious, people!), if I have a fever, or if I'm just in some sort of ridiculous pain. Other than that, I try to go to work while taking the best possible care of myself which means, in no particular order, the following:

-quitting coffee (I don't crave it, and I already feel like junk. why not?)
-getting a lot of sleep. A LOT.
-taking a delayed-arrival schedule at the office (let's face it, mornings with a cold bug are especially yucky. If I can go to work an hour or two late, I'm much more likely to feel better and be more productive the rest of the day. BONUS: avoiding the post-sick-day email marathon.)
-drinking tons of herbal tea (especially ginger and peppermint)
-making toddy at night. (boil some sliced fresh ginger in water, add: whiskey + citrus juice(or fresh cranberries) + honey)
-making chicken soup.

This time around, I got laryngitis. I haven't had laryngitis since I was teaching 6 periods of 7th grade english, and assumed I probably wouldn't have it again since I am no longer in a profession where I have to talk all day. Wrong! I was without a voice for most of 5 days.

Since I don't typically speak before I get to work, I discovered that I was without a voice only due to the fact that my mom called me that morning before I left for work. After trying and failing to shout hello, I had to hang up and text message her, apologizing for hanging up.

After about 1 hour without a voice, I started searching pinterest for laryngitis cures. Both raw ginger and garlic are widely touted as being helpful for laryngitis (toddies are also helpful, but not for during the workday. I do have standards. Also, for the record, I did not chew raw garlic at the office.) Chewing raw gingerroot instead of sucking on cough drops definitely helped, but I also relied on putting a significant dose of ginger into my chicken soup.

Being sick so long had an upside; I was able to perfect a spicy, gingery egg-drop soup that I could enjoy by the bucketful. It always sounded good, even though nothing else did, and it had enough sinus-clearing spice to get through the taste-bud fog.

Chicken-and-egg soup (and cure for laryngitis)

Bring chicken broth, water, grated ginger, garlic pepper flakes, sage and black pepper to a simmer and simmer for 15-20 minutes so flavors can blend. Mix a slurry of cornstarch and a few tablespoons cold water, add by spoonfuls to the broth mixture, stirring constantly to avoid lumps until the starch is all added. Do NOT allow to boil, but simmer until broth thickens slightly.

Lightly beat the 2 eggs, and then use a spoon or whisk to drop the egg mixture into the broth, stirring to break up egg as it cooks instantly in the hot broth.

Stir in the chopped fresh watercress leaves, simmer a few more minutes until the greens are cooked, and serve.

I've been keeping it simple and and focusing on the broth because of being sick, but you can add any number of veggies or noodles or rice noodles, depending on your preference, or actual chicken meat, if you prefer.

Sometimes I'll stir in a few trader joe's chicken potstickers and let them cook in the broth for 10 minutes at the end. yum! 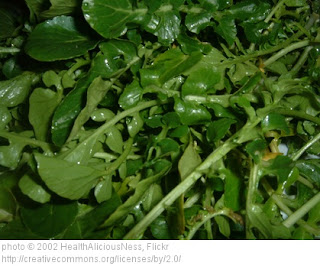 Watercress isn't very common, but I bought a couple of hydroponic plants once for a recipe and planted the roots to see what would happen. Now it grows naturally in my garden each year. The greens are spicy, almost horseradishy, and it's very hardy, flourishing in our (mild pacific) winter, so it's harvestable right about this time of year.

This will be pretty strongly gingery and spicy so temper it if you wish. I sometimes add a dry white wine in place of one of the cups of water, which adds a nice sweetness to balance the ginger-spicyness. If it's not spicy enough, try a little swirl of sriracha or chili oil, or for the truly brave,Trader Joe's has started selling a Ghost Pepper spice grinder. It comes with warning labels, and my dad officially declared it too hot, which is a first.
Home + Hospitality

jana.kaye said…
Sweet! Hope it turns out for you...jessi and i discovered ginger as the key to excellent chicken broth a few years ago and haven't turned back.

One time a friend was complaining about how a recipe called for fresh ginger..."who the heck keeps gingerroot sitting around in the kitchen?" and we both looked at each other and then raised our hands at the same moment. A favorite ingredient!
February 12, 2013 at 10:02 PM

Jenna St. Hilaire said…
I'm excited to cook with fresh ginger. The one thing I've ever done with it was blend it into applesauce, which proved to be a rousing success. On account of which, I'm eager to find other uses for it. Powders are never quite the same.

Am hoping to make my first attempt at this recipe tonight, since I'm getting over a cold and need to go to the grocery anyway... so thanks, this is ideal!
February 15, 2013 at 10:37 AM