February 08, 2012
A heavy-hearted post yesterday, but I am happy to share one of my happier moments today.


A friend from work, Britt, asked me early last summer if I would create a guestbook for her wedding in September. We tossed around ideas for a few weeks. She liked the thumbprint idea, but wanted something a little more original.


We decided to go with an UP-style balloon cloud, but Britt wanted a golf cart to anchor it, since she and Dan both like golf...well, Dan likes TO golf, and Britt enjoys a good book from the seat of the golf cart on a sunny day.

I went to work, and, sad to say, failed to photograph much of my process. My plan was to use a linoleum block stamp for the golf cart, so I spent a lot of my time designing a clean, print-friendly version (did you know there are not that many vintage-y golf cart designs out there? Apparently affording a golf cart is a relatively recent phenomenon.).


Dan also is a big fan of BMW's, so I eventually sketched up a wobbly design hybrid incorporating some BMW elements into a basic golf cart, transferred a reverse onto the linoleum block, and consequently ruined one of my (twelve-dollar Ikea) coffee tables with my enthusiastic carving.


I used a xylene transfer pen to carefully transfer a reverse image of their names and wedding date, and painstakingly stamped a centered print of the golf cart design. (Bonus: Britt got to keep the stamp!)


Since it's on a huge sheet of white rag paper, we did not want guests putting fingerprints where they should not go. I carefully cut out an oval shape of draft paper vellum to fit the basic area where the cloud of fingerprints would be. The vellum protected the rest of the paper...thank goodness, for many wedding guests had a heyday putting thumbprints all over the vellum layer!

Britt picked out a bright stamp pad, and I made a small sample image by way of instructions. After the wedding, she returned the guest book to me and I evened out the cloud of thumbprints and added the string lines. I found that adding a few delineating lines here and there also helped the overall definition of the image. 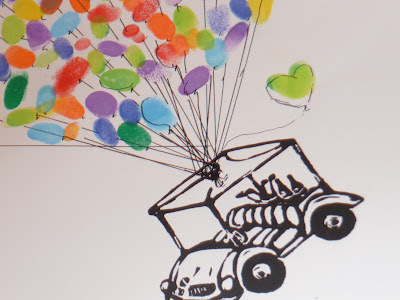 This was such a fun project with so many unique details to work out. I loved being a part of Britt and Dan's special day!


Maybe once Britt gets it framed, I'll get use a real camera and get a good photo!

Britt said…
so beautiful; we love it so much! thanks again for all your work and love. i will definitely send you a picture once i get it framed...whenever that may be. <3
February 9, 2012 at 10:25 AM

jana.kaye said…
Thanks, Bob! it was a very fun project with lots of unusual elements for me. So nice to meet you and Samantha this weekend!
February 24, 2012 at 11:50 AM