What I like about being clumsy: Mud and Grace

October 11, 2010
I fall. It's sort of what I do. I have a lot of stories about my experiences falling that I'm going to keep in the locker for other pointed morality tales. My flat elbow, lumpy collarbone, threadbare ligaments in my right ankle, and various assorted bruises that constantly haunt my limbs can testify.

My ex-roommate Sara is going to laugh at this post because she was witness to so many mishaps. I'm just dead clumsy.

Currently, my left hand and right shoulder are sore because of one such fall yesterday while exploring a Corn Maze with some friends. To be completely fair to myself, it had poured rain the day before into the clay-mud riverbottom fields of Burlington. I was not the only one slipping about in the narrow puddled trails of the cornfield scavenger hunt. But I was the only one who actually went all the way down with a squeak and a fling of the dried pumpkin seeds I'd been snacking on while navigating the maze. Flat on my backside, I did the only thing you can do. I started laughing.

I like to be thought of as cool. I'm a people pleaser, and generally care about what people think. But at times I've fallen into the trap of fearing what people think so much that I have stopped taking risks. I have stopped going on adventures, in a way. I have stopped putting on my Chucks (cool shoes) and going out in the sun to run around in the mud at a corn maze because of the fear of looking ridiculous. I've missed out on a lot of fun.

Do you know what happens when you actually do look ridiculous? You quit worrying about falling. You're suddenly free to slide and slip in the mud and splash in the puddles. Your butt is covered in mud. You can't really get any more ridiculous. So all of a sudden, you're free to risk everything.

Here's the thing...you were as free to risk everything before you fell, as after.

Fear of ridiculousness traps so many, many people I know into living safe lives. It's not fear of danger, necessarily. It's fear of being made silly. In a word, it's pride.

They stand around at parties, hands in pockets, making safe conversation, or not saying anything at all, just standing around awkwardly because they're so afraid of saying the wrong thing. They sit at their desks and watch the girls they like walk by and never ask for a date. They fear new foods. They mock other people constantly. They keep a list of expectations in their minds for other people. They offer very little grace to themselves, and therefore have very little grace to offer others.

Well, when you slip and fall on your butt in the mud, there's no acting cool, there's no hiding your Epic Fail. You suddenly have a lot of grace to hand out to anyone else who happens to fall.

Here's the thing. Everyone has fallen in the mud. But a lot of people are edging around with their backs to the wall, afraid of being ridiculous.

Guess what. You already are. 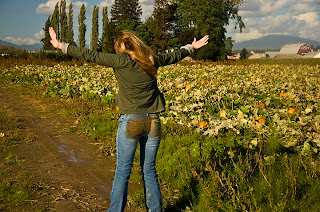 Donna Witek said…
Hi Jana,
I have been following your blog for quite some time... I forget how I got here lol but here I am. Just wanted to emerge from lurk-dom, say hello :) and tell you that I really appreciate this post. One sentence in particular I really relate to: "They offer very little grace to themselves, and therefore have very little grace to offer others." I sometimes do this--fail to offer myself grace, and it affects my ability to offer it to others. This is spot on. Thanks again. :)
--Donna
October 12, 2010 at 12:21 PM

Albert said…
It kinda of comes back to the idea that being cool is being comfortable in your own skin, with everything you are made to be. Great post.

Unknown said…
Ah Jana, I feel like I have been missing out on an integral part of life because I haven't been reading your blog. This I intend to change! I love your perspective on falling down. I have too long been living back-to-wall.
My goal for this year is to live showing my scars and muddy bum with pride! Not too much pride though, I don't want to become an exhibishionist! I love you Jana! You're amazing!
February 10, 2011 at 10:35 AM