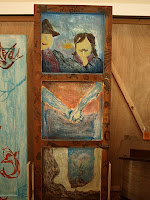 These are my friends Cole and Luz, who happened to be behind the whole doors thing, because they met, then got engaged, and then decided to get married. Luz is a graphic designer, and has always loved handmade and unique designs. Cole and Luz's idea was to include the 6 biblical days of creation in the ceremony, and they asked Jessi and I if we could work out an idea for 6 multi-media art pieces. That sounded very serious and heavy, and made us pretty nervous. Then we realized that it was, after all, a gift to celebrate Luz and Cole, two great friends who are starting out a life of commitment and living grace.
The last piece is about relationship and personal connection. The most interesting thing about working on this door is that I believe I removed more layers of paint than were left in the end. I always work in layers, adding color washes on top of color washes, then wiping or sanding the layers off, leaving only the residue or history of what was there. This process of building and destroying, creating and removing seems to me to embody a sort of sacrificial process that, by being destroyed, actually builds. 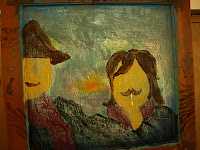 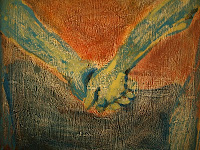 The other two panels simply carry through the theme of connection and relationship. The borders around the panels are illustrated with sketched animals to reflect the variety of creation. 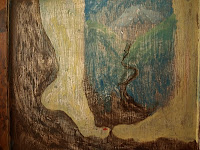