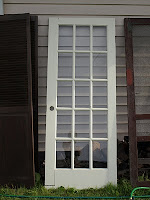 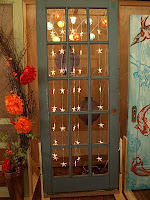 This day is all about light. But more inherently, it's about the division of days and order of seasons. We were completely lucky to find a beautiful french door at the Re-store (unfortunately, we photographed the white side, but ended up using the pretty blue side because, well, sky.). At $25, this one was a splurge. But we did literally nothing to it except clean it up a bit, and build the shelf on the back to hang the lights.
The paper lanterns were my favorite part of the lights, I love how the light glows from within. I traveled to Seattle again this past weekend to set up the doors for an art walk, and Luz and I bought more medium-sized paper lanterns in place of the stars. I'll try and show pictures of that version when I get them.
After the wedding, I was spending time with some friends at their house for the fourth of July. They mentioned that once they had done a storyboard for Creation for their preschool classes, but they had only used 3 boards, since for each of the first three days, God created, but the second three days were about populating that creation. Day 1, the separation of light and dark, finds its purpose now in day 4, with its order of governing bodies for day and night.
I had never thought about creation that way, but that idea lent order and clarity to the whole creation idea for me. 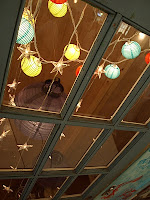