Creation, Doors, and Art as a gift 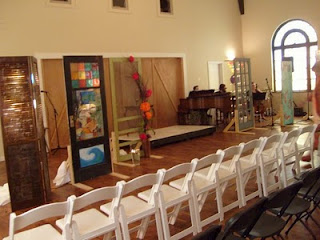 This is the last in a series of posts about the art project my sister and I and some of our friends collaborated on for a recent wedding. The story and details are in the previous 7 posts, if you are interested in reading and seeing more about the artwork shown here.
This is the only photograph we have of the doors set up, just after the ceremony (Thanks to Bekah Stolhandske, who had just finished running the Seattle Rock'n'Roll Marathon in time to come to the wedding, and still had the presence of mind to take a picture.). I think the main reason we're short on pictures of the whole set of doors together is that Luz and Cole wanted to include an aspect of revelation, so each door was draped with white fabric at first. A dramatic reading of scripture, both Old Testament and new, started the ceremony, accompanied with music from a local band, and the groomsmen removed the fabric for each door at the appropriate point in the reading. You can even catch a bit of the white fabric on the floor behind Day 2 in this photo.
The other part of the project that was critical were the stands, designed by my dad and I. We needed them to support the doors, especially Day 3 and Day 6, which were terribly heavy, but we also wanted them to be minimal in appearance, and to stand the doors upright like a proper door and not like an easel or sandwich board. Since the integrity of the stands was important, I went to my dad for help. We spent an afternoon in the lumber store (childhood memories!) and in the garage cutting the lengths of 1x4 and getting them assembled.
The stands are the part of the artwork you're not supposed to notice, I suppose...but they are also part of the integrity of the whole picture. And that is probably a metaphor for something. :)
Art + Design